After a short day-trip to Rock Formations on Makran Coastal Highway last month, I could not resist and made another plan till Gwadar and beyond.
I was accompanied by a friend Haris; a couple of other friends were also interested but could not join due to other commitments. We planned to leave on Sunday September 19, so I made necessary arrangements on Saturday including arrangement of supplies (food, water, extra fuel, etc) and pre-trip car checkup. We departed around 6:30 in the morning on the scheduled day; first took Northern Bypass from zero point, which actually proved wrong because of heavy traffic, then replenished the CNG cylinder from Hub and Petrol tank from Windar, as per the previous experiences, and took our first major break at Hingol River Bridge for brunch at around 10:30 am.
We than continued till Pasni – bypassing Rock Formations, Kund Malir, and Ormara – and stopped at Pasni Fish Harbor to gather information about Astola Island logistics. At around 5:30 pm, we finally managed to enter into Gwadar city after a journey of around 700 km, and subsequently searched and negotiated for night stay. Early morning, the next day, we visited Zaver Pearl Continental and Gwadar Fish Harbor, and then embarked for Jiwani. On our way, we were struck by a pleasant surprise by the roadside milestone, which showed distance from Pak Iran border in addition to that of Jiwani. That was real good news for us and that too in the wilderness, as I was not expecting a highway type road till Iran border.
We returned back to Gwadar before sunset.
Next morning we started our journey back home after replenishing both, our car’s fuel tank and ours. Instead of bypassing Pasni, as per the morning’s plan, we decided to give Astola Island a second chance, but only to gather further information about the voyage. We took brief stops at Rock Formations and Malir Kund beach first and then went off the highway to follow Hinglaj Yatra. Luckily, the water in the stream was not enough to halt our car, so we made all the way to Mandir by car, and luckily found a troupe from Karachi to add flavor in our expedition. It was around 6 pm when we rejoined the highway, and due to night driving blues, could only made it to Karachi by around 11 pm.
Pictures and tips will follow in coming days, Inshallah, so stay tuned…
Posted by Muzzammil at 3:35 PM No comments: Links to this post 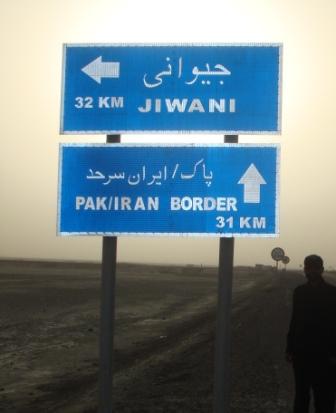 While planning my Makran Coastal Highway trips, I could not find much information about exact distances between cities and other attractions along the highway, so I thought to mark them myself during my trips in August and September (2010), and here it goes:
(All distances are calculated from Hub Toll, for the sake of uniformity, which is 40-50 km from Karachi depending on the route and point of departure)

A Quick Scape
﻿﻿﻿While thinkling of making a quick one day scape from the noisy Karachi, my wife and I decided to explore some of the Coastal Highway pearls.


We planned to drive all the way to infamous Rock Formations and Malir Kund Beach, some 300 km from Karachi, and embarked on our joureny the early morning of August 14, 2010 - Pakistan's Independance Day - with our daughter (see the last picture).

Makran Coastal Highway: A Pleasure to Drive
﻿
﻿﻿653 km long Makran Coastal Highway joins Karachi (via RCD Highway) to Gwadar and beyond. The Highway is a pleasure to drive on with quite a few off-the-beaten-path-surprises; natural rock formations, long stretches of unpolluted beaches, the oldest Hindu shrine (Nani/Hinglaj Mandar), world's largest mud volcanoes (off-road), a rare Arabian sea island near Pasni (Astola), and a WWII Museum in Jiwani.﻿﻿

Rock Formations - Princess of Hope
﻿﻿﻿
﻿﻿﻿The most fascinating aspect of the journey was a sojourn on naturally carved rock formations. Swfit breeze from the Arbian Sea worked like an ancient artisan to carve out some amazing natural structures along the coastal belt. These structures are compelling enough to cast doubts in the most rational of minds, and for superstitious souls nothing can be better than these formations to satiate their speculative buds. This perticular sclupture like formation is named as Princess of Hope reportedly by Angelina Julie during her visit of the site.
﻿﻿﻿
﻿﻿﻿

Rock Formations - The Sphinx
﻿
﻿This sphinx-like structure is the another mind boggling formation in the Coastal Highway collection, which starts from around 150 km from the zero point Makran Coastal Highway (around 280 km from Karachi), after crossing the marked Malir Kund beach, and stretches further 10-15 odd kilometers till Buzi Pass.


Rock Formations - Lost Civilization?
﻿
﻿Discovery of ancient ruins of Harappan era near Pasni, presence of antique Hindu temples, proofs of Alexander's passing the coastal belt, and a mosque referred to Hazrat Khizr at Astoal Island make these rock formations speculatively meaningful. Who knows that an excavation may lead to the discovery of a lost civilization!

Rock Formations - The Mystery
To make things more mysterious, I noticed that some of the rocks have curves so resembling to human ones, and after a prolong gaze I noticed some gigantic human postures to my astonishment. The experience was more like computer based puzzles where one can find hidden shapes in ordinary lines.


At one spot, when I stepped out of my car to have a closer look on these formations, my wife felt a significant pressure drop with increased temperature and slower winds. I noticed the same thing upon her indication and had to move away after her insisting that there might be some supernatural forces which may cause bad omen to humans. I could not ignore her point of view especially in the presence of some pillar like structures which reminded me of the mentioning of pillars in our religious books used to apprehend satanic forces.

Kund Malir and Other Long Beach Stretches
﻿
﻿Makran Coastal Highway is also gaining popularity among Karachites because of its virgin beaches. Kund Malir is one such beach located some 140 km from the zero point (around 270 km from Karachi). This time I noticed some palm/date trees along with huts and canopies hinting towards some entrepreneurial activity. On one hand, this is good as previously (2 years ago) there were absolutely no facilities around the shade-starved arena. On the other hand, this is an omen of more people coming and hence less chances for virginity to survive; a typical tourist trade-off . I also noticed a small fish market around, however, closed at that moment.
Apart from Kund Malir, there are long stretches of Arabian Sea beaches along the Coastal Highway which turns this long ride into a driving delight.

Milestones
Finally, we stopped to turn back home when the roadside milestone showed that we were just 81 km short of Ormara, and the speedometer mileage suggested that we were more than 300 km away from home. It took us 6 hours to reach to this point, which was significantly longer than what we estimated as we were expecting a brisk drive.
﻿
﻿
As expected, the highway, especially the Coastal Highway, was in the perfect driving conditions with virtually no speed limits, however, it were the enroute stoppages, mostly on security check points, that caused the delay. Other stoppages were on account of refuelling (before entering onto the Coastal Highway), trye check, and sightseeing. I had to take care of fuel economy so seldomly drove beyond 100 km/hr. On our way back it took us 5 hours mainly becuase of relatively fewer security barricades.


On security check points, which mostly controlled by local levies, we were asked about the CNIC, the driving license, car registration documents, and our destination, while at some points chases number had also been verified. On our way back, we had to made the entry of our particulars on a Coast Guard check post. The staff was polite and cooperative, however, it caused us breaking the speed multiple times.

Refuelling
﻿﻿
﻿﻿Refuelling is an important aspect while headingtowards Makran as there are no proper fuelling stations on the whole Coastal Highway and the only resort is roadside vendors which are not very assuring of quality. Keeping this in mind we got our CNG tank refilled from the last CNG station situated at Hub and then switched to petrol/gasoline. We further got out petrol tank replenished at Winder, the last town before the Coastal Highway. It took us around 15 litres of petrol and 11 kg of CNG to cover a distance of around 620 km.
﻿
﻿﻿
﻿

First Road Trip of Misha
﻿﻿
﻿﻿ This was the first long journey of our 4 months daughter Misha. She did well Mashallah and did not bother her mother a much, however, she felt a bit tired when we reached back home and caused her grandmother cautioning her father about taking care of her health and avoiding such adventures.


Overall, the journey was quite a fun especially the Rocks Formation section and the smooth drive, something unfamiliar with Karachi's chaotic traffic. This is the second time I explored the highway only to make a third and more comprehensive plan especially covering Nani Mandar, Astola Island, and Jiwani War Museum.


With the expectation that you have enjoyed this virtual trip, you are welcome to contact me should you require any information/assistance to make this trip.
Posted by Muzzammil at 10:37 AM 4 comments: Links to this post