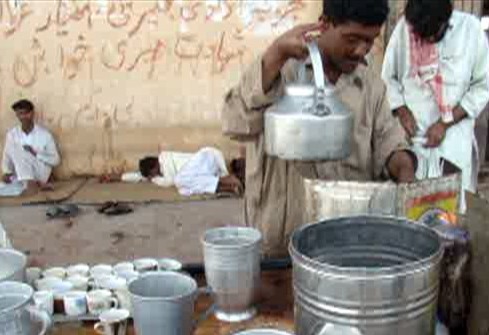 You will find this tea vendor, or the Chai Wala, at the jetty near the auction house serving hot tea to his customers, mainly fishermen and auction hall labours. His portable cart allows him to keep changing his shop with Sun’s direction to provide his customers with a level of comfort! So, if you want to refresh up yourself then there is no harm in having a make-to-order cup of tea. Don’t forget to tell him about your preferences, for a strong tea or the Karak Chai, beforehand otherwise expect a sugary and a milky syrup with a pinch of tea. And beware, there are no seating arrangements, so have it like they do at Italian cafes!
Posted by Muzzammil at 4:51 PM No comments: Links to this post

Pasni, and in fact the whole Makran coast for that matter, is so much about fish. So much so that a historian of Alexander era complained that all food, even mutton, in Makran tastes like fish. He actually could not figure out that local chefs usually use the same crockery and the oil for cooking other food which they have already used to cook the fish! But where is the trap?
Actually, locals over there eat all kinds of fish without even giving preferences to the taste and to the texture. Not to mention, that they have their own recipes to turnaround some of the bland varieties into sumptuous meals. But making things worse, they even don’t mind having fish full of thorns which otherwise can disturb one’s ENT mechanism. Anyway, overwhelmed by this fish-centric culture, we chose a fish and only after the BBQ we found out that the fish is a combination of both of the above mentioned qualities, alas! Full of thorns and no taste, hence it was a total waste.
But this is not to suggest at all that one should avoid the fish in the land of fish-eaters (actual meaning of the word Makran). This would be an injustice, in fact. However, one needs to be a bit choosy and should avoid unfamiliar fish verities even though they look popular among locals. Instead search for varieties like Surmai, Sonu, Heera, Ghissar, Mangra, Mushka, and obviously the tasty Pamphlet.
Posted by Muzzammil at 4:05 PM No comments: Links to this post

Pasni is for Seafood!

It would be injustice to Pasni and to one’s own self should someone visit the place and does not have seafood, available in wide and at times weird varieties. Though Pasni is a small time town, but it accounts for the significant seafood catch out of the total Makran coast produce, most of which makes its way to export markets due to its size and quality. Good news is one can buy the precious metal, say fish and shrimps, over there in whatever quantity they fancy without breaking their pockets. Unfortunately, I had to wait for my second visit to take benefit out of this value proposition as the first one, enroute to Gwadar, only proved to be a raky.
I thought we would get a better and a fresher deal from the fishing jetty itself rather than bargaining at the fish market; and the fluke went well. We bought more than three pounds of medium sized pink prawns, called Jheera in the local jargon, and small sized unfamiliar fish in the similar quantity from one of the fish traders. Including the labour to peel and clean the treasure, to make it ready for the BBQ, we paid a meager sum of around PKR 800, i.e. around USD 9.
It is totally another story that the fish was nothing but a lesson learned; it was actually BBQed shrimps that made our long day after a drive of more than 500 kilometers. At the end of that sea side BBQ evening, we were all wondering why not we bought three pounds of shrimp for each five of us in the first place! To make up for this gross oversight, we decided to load the ice box with shrimps and sneaked into the jetty again the next morning, only to learn that shrimp carrying boats usually dock at the jetty before the sunset, alas!
One can also take benefit of the local eateries which sell cooked, usually fired, seafood including fish, shrimps, and lobsters with authentic local taste. It would be interesting to mention here that the word Makran is derived from Mahi, means fish, and Khor, means eater. And people of Makran are proud fish lovers to the extent that a historian of Alexander era suggested that all the food, even mutton, in Makran coastal range taste like fish!
Posted by Muzzammil at 1:48 PM No comments: Links to this post

Pasni may be called a paradise for shrimp lovers, where one can buy high quality shrimps, prawns, and lobsters (and I just googled to find out that there is actually a minute difference between shrimps and prawns!) without breaking their pockets.
The tested method is to head to the jetty, instead of bargain hunting at the local fish market, for a better and a fresher deal. The best time for this fortune hunting is a little after noon till the sunset. Well, at the jetty, there are no formal shops or stalls which sell the sea-catch as such. So what I am suggesting here? That one jumps into the rich sea and catch some for them, obviously not! One practical way is to walk along the beach located on the left side of the jetty until one finds fishermen busy in trapping fish and shrimps. Due to the natural setting of the Pasni bay, some lazy fishermen usually get their share of shrimps barehanded, i.e. without even a boat. So, if you find one with a satisfied face and some load in their hands, don’t wait and quote your price after having a brief look at their catch. A pound of medium sized prawns, not significantly smaller than jumbo tiger prawns, should not cost you more than PKR 200, i.e. around 0.25 USD.
Should you not feel confident of your luck, there is another way out, which I tried and managed to break a value deal. Go to one of the fish collecting shops, which in fact front for export dealers, located around the jetty. These places are very visible and can be located from the fish loading/de-loading activity. Tell them, in a polite tone, that you are not into fish business and need only a couple of pounds shrimps for yourself and that you could not find that fresh and big shrimps elsewhere. They may ignore you but be persistent to get your deal. This way, we bought more than three pounds of medium sized shrimps for around PKR 600, i.e. around USD 7! Deal, isn’t it? Btw, after breaking the deal, we had to go to the nearby fish market to peel them off and to make them good for the BBQ we did along the seaside.
Posted by Muzzammil at 1:40 PM No comments: Links to this post

Juddi Hotel in Pasni - When You Dont Have Choices

Juddi Guest House and Restaurant is located in the heart of Pasni and is the only livable place commercially available on the whole Makran coast barring Gwadar. Although I did not stay there, though intended, thanks to one of the colleagues who arranged for a private guesthouse, but the place is worth mentioning because of lack of accommodation facilities in Pasni and Ormara.

The hotel is a basic lodging place with primary facilities. Rooms were just fine and were categorized into AC and non-AC, which signifies the level of cleanliness and hence the higher price. Staff was polite and cooperative, apparently. I also sneaked into the bathroom of one of the AC rooms, which appeared clean and odorless. There was a restaurant also on the mezzanine floor which also looked ok in terms of cleanliness and as per the given conditions.

The hotel is recommendable not because of its merits but due to lack of options. We actually wanted to spend the night at Ormara, but only after searching wildly for a livable place for an hour or so we resorted to plan B, i.e. Pasni. Therefore, Juddi Hotel is effectively the only commercial option along the Makran Coastal Highway before Gwadar. The place is also ideal if one is planning for Astola Island.

Pricing: For a double bed, we had been quoted PKR 1,500 (around USD 17) and PKR 600 (around PKR 7) for AC and non-AC room, respectively. I assume that these rooms are negotiable to the extent of PKR 100-200 depending upon the demand supply scenario. During my second visit, when we actually stayed in Pasni, we bargained for triple bed room with extra mattresses for five of us and the guy was finally willing to charge us PKR 2000 (around USD 23) for one night.
Posted by Muzzammil at 1:35 PM 2 comments: Links to this post 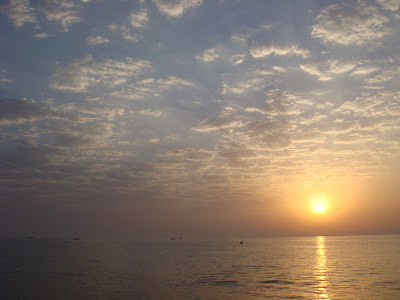 Pasni is a small fishing town located along Makran Coastal Highway some 500 kilometers from Karachi, or around 120 kilometers short of Gwadar, and is considered as one of the main shipping hubs of Makran coastal range.
Seafood and Sunrise
Two reasons the town can easily be fit into an explorer’s itinerary are the inexpensive seafood and the amazing sunrise along its eastern coastline, the latter is otherwise an exception in Pakistan as country’s coastal line is largely South/West facing.
My Peeks
My first visit of the town was in fact a sojourn during the Road Trip to Gwadar in September 2010. Actually, I aimed to collect some firsthand information especially about accommodation options in the town and about logistics to Astola Island. My travel buddy, Haris, and I wanted to visit the island but the paucity of time, the low tide, and the absence of economy forced us from making the voyage.
A month later, a group of colleagues made a plan to explore the Coastal Highway till Ormara and gave me no choice but to join them. Pasni was actually the Plan B of our trip, in case we would not find a place to spend the night in Ormara. And we did not! The town surprised us with its inexpensive seafood and the magnificent sunrise. However, I could not do the island again, alas, because of time constraint.
Pasni Differentiation
One of the distinguishing features of this town is the presence of a deep sea island, referred to as Astola in the Atlas, under its administrative jurisdiction. This 200 feet high platform, locally known as Haft Lar, mainly attracts scuba divers due to the steep fall on its Northern face and also used as a base by the local fishermen in the netting season. Ruins of an antique Hindu temple and a mosque attributed to Hazrat Khizr increase the mysteriousness associated with the isle.
Although Pasni is a small settlement, which had been further overshadowed by the emergence of Gwadar and hence ignored by travelers, however, history of this town dates back to Alexander’s Indian Campaign and further back to Harappan era.
Posted by Muzzammil at 1:01 PM No comments: Links to this post