Travelogue: Minarets and Pyramids of Cairo

This is Day 1 of Egyptian Journey - 2011
Day 0: The Land of Pharaohs - Ancient and Modern
Day 2: Beauty, Enchantment, and the Suez Crossing of Ismailia
Day 3: The Best of Free Cairo
Day 4: Mummies and the Nile
Day 5: The Colourful Friday Cairo
Taxi Tips: Know Your Numbers
Video: Egyptian Magic

Monday, December 5, 2011
The Timeless Metropolis
Cairo is called the City of Thousand Minarets and rightly so! The whole metropolitan landscape is decorated with intricately designed towers of historical mosques! The other part of the city - Giza - is world famous for its giant Pyramids, including the Great Pyramid and the Great Sphinx!

Most interestingly, thousands of years of history has actually been mingled up with the hullabaloo of a densely populated conurbation. Tahrir square and the election campaign are just a small part of this hubbub!
Fortunately, we managed to catch a glimpse of all of it right on the first day of our Egyptian Journey.


The Poor 'Q', ق
While hailing the taxi in the morning for the Cairo Citadel, I noticed that Egyptians does not bother pronouncing 'q' and rather keep it silent, at-least for Qal'aa قلعہ and Qahwa قہوہ which are pronounced Al'aa and Ahwa respectively!

Walls
Envisaged by one of the most glorified Muslim generals Saladin, صلاح الدین, the Saladin Citadel, قلعہ صلاح الدین, is a powerful reminiscent of the Medieval Era. The fort remained the center-stage of the Egyptian politics for centuries and underwent a lot of changes during various succeeding dynasties.

Inside, most notable of the structures are Al-Nasr Mosque, مسجد الناصر محمّد بن قلاوون
, (b. 1318 AD) and the newer Muhammad Ali Mosque, مسجد محمّد علی, (b. 19th century). The architectural contrast of the twin mosques was especially worth noting.

Muhammad Ali Mosque is visible from far outside the Citadel and looks majestic in the evening with the aesthetic illumination.
Meeting Pakistani Travelers - a Rare Breed!
Inside we met a Pakistani family who was also visiting Cairo. Nasreen, the daughter studying in Cairo, was playing the guide role. She also offered to show us around.

Meeting Pakistani travelers, and that too non-expatriates, was a pleasant surprise indeed as the closest we found during our previous travels were always the Indians.
Sundial 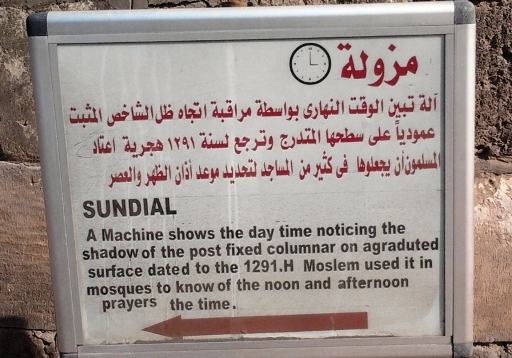 Entrance Ticket: EGP 50; Student: EGP 25; and Arab: EGP 2!
Between the Historical Lines
From the Citadel we walked to the Mosque Ibn Tulun, مسجد احمد بن طولو ن. Passing through the hustling and bustling Cairo was an experience in its own; crowded streets, hurried up pedestrians, horse pushed vegetable carts, street vendors selling local food, and the narrow alleyways!

In short, that was full of life, energy, and the carbon monoxide coming out of guzzling vehicles! Halfway through, we stopped at a roadside café, an integral part of the Egyptian life, to sip a cup of Ahwa قہوہ to absorb the feel of the town.
The Oldest Surviving Mosque
Built around 876 AD, the Mosque of Ahmed Ibn Tulun is one of the oldest mosques, if not the oldest, in the world surviving its original form and is still the largest in Cairo! Raised for around two floors above the ground, the archaic mosque is still an impressive structure with a characteristic outer wall.

It is remarkable how the giant structure not only survived the vagaries of the weather but also the conflicting interests of the succeeding Muslim rulers!
There we had some strange experiences, which we only pondered about in the following days and came to a conclusion that we might had met a troupe of Jinn!


Runoff
Right outside the mosque, we saw some rather worldly sights; runoff polls for the second round had been in the full swing. The process looked smooth and relatively tension free if compared to what happens in Pakistan during such crazy days!
Up-til then I had developed an initial understanding of the country's social and political landscape.

After the 30 years dictatorial rule, the whole nation is now looking excited to start a new era through the power of the ballet. All the youngsters - we got an opportunity to talk to - looked determined to throw the tyranny out of their land, and their waters, forever!

This is the new generation; youthful and plentiful!

On ground, there are more than 30 political parties which claim to have an idea how to steer the country through.


The Sounds & Lights Show
In the evening we again switched back to the history and its lessons!

The plateau of Giza, which houses the only surviving Wonder of the Ancient World, glows up every evening to peek into the mysterious chronicles.

So after having a freshening-up break, we joined Nasreen et all again for the Sounds and Lights Show.

The engulfing darkness of the African desert was only helping the incident laser beams to lit up those giant structures as per the requirement of the narrated story. Three descending pyramids lined up behind the huge Sphinx made that a perfect venue for the live theater!
All in all, it was an extensive show, if not spectacular, an experience good enough to take one into the trans!
Entrance: EGP 75

Transport: The arena is an hour drive from the downtown and we paid EGP 75 for the whole trip.

Kushari - the Egyptian Daal-Chawal
Before going back to our room we had Kushari, کشری, a local favorite, from the corner shop!
Tip of the Day: Cairo Cabs are cheap and easily available. Just wave your hand when you need one and they will be happy to pick you up then and there. But beware, some of the cab drivers around the city streets are always in search of a bamboozled traveler to rip them off.
The tested is to look for a white cab only and insist for the metered fare. That usually worked for us. However, when streets were crowded and the distance was short, we found it difficult to negotiate to the cab driver to use the meter. In this case, EGP 5 خمسہ, was good enough for 10 minutes ride. For the airport we paid EGP 35.

Knowing numbers and places in Arabic also helped us a lot.
Why Taxis are so Cheap in Cairo: Even when a barrel of crude oil is above USD 100 in the international markets, Egyptians only pay a couple of local pounds for a liter of Petrol! Lucky you!